How to raise the bars, Know from CEAT Logo

Yet another work by Prof. R K Joshi while working with Ulka Advertising in 1983 and that was for CEAT tyres. Read more for further details about the legendary graphic designer R K Joshi Biography and Works of  Prof. R. K. Joshi

It is the simple rhombic shape showcasing CEAT. The erstwhile form signified performance, style, strength and durability of CEAT Tyres. The tagline ‘Born Tough’ extended the significance of the logo further. The two triangles bracketing the word CEAT mark its exclusivity among tyre brands of the early 80s when CEAT emerged as one of its first kinds. The simple bold letters of CEAT establish a premium position of the products in the market then. (Source: D’source, IIT Bombay)

How CEAT Raised the bars

In 2008, CEAT hired a Bengaluru-based Graphic Design studio Ray and Kesavan for the redesign of CEAT Logo. Extensive feedback received from CEAT employees, customers and partners resulted into a new CEAT Logo. And that was inspiration emerged from the idea of ‘raising the bar‘.

2 thoughts on “How to raise the bars, Know from CEAT Logo” 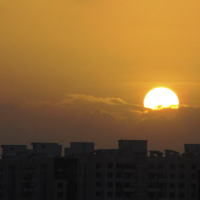